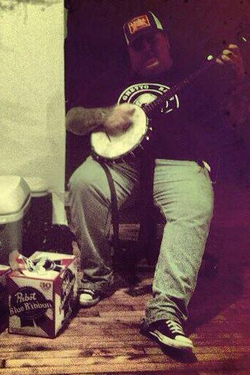 These aren’t the first or the last words I have written and will be writing about Owen Mays, it’s something I’ll be doing the rest of my life. I never expected to count a legend as one of my best friends, but that’s exactly what he is—a legend. A week and a half ago, he was a living legend. Now he has passed. Now we know he had a huge heart, buried under that tough exterior--literally. Owen didn’t know fear in the way many know it, but he had a wealth of sensitivity, feelings. Those feelings drove him to be the man he was and he used his strength, both mental and physical, to live a life that showed no quarter to those he deemed to be in the wrong. He stood up and said his piece—and what a piece it was. One thing I learned from watching him over the years was that when he did take a stand, it was for a good reason and he acted on the things that most of us let go by without speaking up.

I saw him defend women, any and all music that came from the heart, and mess with one of his friends in any way and it wouldn’t turn out good for you—to say the least. So many of us here were blessed to spend a lot of time with Owen and it was hard not to enjoy yourself—whether at a show, driving down the road, or just sitting and enjoying a late-night conversation with him. Man, that guy could talk—not just talk, but converse. While he could banter and tell a joke with the best of them, he could also hold down his end of a serious conversation—whether it was about music, wrestling, politics or behind the scenes stories of his life on the road.

He was the kind of guy who followed his interests and his loves, whether it was football, professional wrestling, band & chorus, classic country music, and, of course, bourbon. But through all those pursuits, music reigned supreme. It was in his heart and in his Welsh blood. His grandmother, Catherine Jones Mays, was a Welsh hymn singer, a Gymfana Ganu, and Owen’s mother also came from a musical family. When I think about those Welsh hymns, I think about truth and life and stories of heartache, pain and tragedy—but also joy. And it makes sense, because he didn’t believe in writing songs about anything he hadn’t actually lived. I never heard him tell a lie, a tall tale maybe, but not a lie. Who he was came out in the songs he wrote and he respected and worshipped musicians who did the same.

He didn’t just learn those musicians’ songs, he studied their lives and their inspirations, and he shared that knowledge with all of us. He was a historian and an educator who made his own footsteps through the halls of musical history. You couldn’t hear an Owen Mays song and not feel it, not love it. I loved everything about the music he made from the first song I heard, and I got to become a friend and brother to a man whose music not only spoke to me, but to my family in Kentucky. He loved visiting our farm in Kentucky, hanging out and making music for them, and they loved him for it. My family doesn’t accept people easily, we’ve stuck to ourselves for generations, but they found a kindred soul in Owen. He was an instigator and a builder, to say the least. Only he could have turned my uncle’s machine shed, the Dirty Barn, into a multi-band showcase in a little town in Kentucky where not much happens. They were quick to tip him in cash, hugs…and moonshine. They appreciated his music and the music he brought to them, like Sarah Gayle Meech, Ray Lawrence, Jr., and many more. He did the same for us in Chicago, creating the Office Sessions and filling an empty space in many of our lives with music, fun, family and, yes, shenanigans. So many of the best things in my life and the lives of many of us started as a thought in his big old brain, just like his music.

Owen saw the light from the beginning and never stopped heading toward it, and now he’s found it. His mother, Ginny, supported his dreams through it all, was always sad to see him leave on tour and glad to see him come home. I’ll stop now and finish with her words, as related to me by Angela Martin Licari, Owen won’t be coming back from this tour, but he will be with us always—because his music will never die. - Jody Robbins