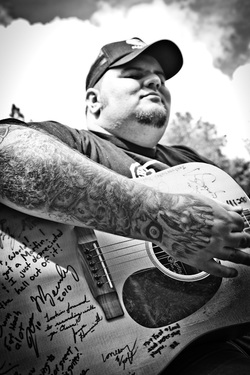 The day Owen had died, my grandfather called me. He told me he had bad news, and he asked me to sit down. I asked him what was wrong and he asked me again; "Are you sitting down? You really need to sit down." Ginny had called him, trying to get a hold of me, and then he told me that Owen was gone. And the only reason that I could even believe something like that was possible was because it was coming from my grandfather (Bompa, as I call him, as did Owen).

Owen and I had met over 20 years ago in middle school when my family moved to Cambria. Our school had planned a field trip to the park that day, and at some point one of the kids started making fun of me, trying to get over on the new kid; customary hazing. (And if you’re here today, by the way, no hard feelings.)

Anyways, I wasn’t going to take it, so I went right back at him, calling this kid all of the nasty names I could, and being as absurdly foul as possible. Owen had overheard the exchange, and since he didn’t really like the other kid anyways, he jumped in alongside me, pointing and laughing at the other kid. From that day on, we started making fun of everything together, and that made everything fun.

Years later, when someone asked us how we met, he confessed that he was actually going to beat me up that day, though he couldn't remember why anymore, and that’s the only reason he heard me blasting the other kid in the first place. I’m glad he liked what he heard, or else I might only just be waking up from my coma now (he was always a big kid).
Owen and I had been friends for so long that he was part of the family. After I had graduated from high school in Cambria, I moved back up to Stevens Point for college, where most of my family was. The next year, Owen followed me up. We would all go fishing, hunting, and to the shooting range together. He was at all of our family gatherings. As one of my uncles put it, we were two peas in a pod.

Owen was with me the day Bompa came to my room in tears and told me that my grandma had pancreatic cancer, and that she was going to die. Owen cried with us that day, and he sang at my grandmother's funeral. He also sang at my great grandfather’s funeral, Bompa’s father.

Owen was there for anyone who needed him. When our neighbor had a 40 foot tall pine tree blow over onto his garage, we lifted it off by hand. Whenever we needed to split wood, he was ready to go. When my grandfather had accidentally made too many pork steaks one night, we were right over.

We went everywhere and did everything together. On the spur of the moment, we would drive from Stevens Point to a Steak & Shake in Janesville, just because they had awesome peanut butter milk shakes. Or to Waupun for a 15 inch Gundy’s sub sandwich. We were the first in Stevens Point to accept the Polito’s pizza eating challenge (we got close, but didn’t win that one). Or make a run to Madison to see if we could eat a giant Philly Cheesesteak in record time and have the sandwich named after one of us (Owen did win that one). So, safe to say, we ate a lot.

But calories and carbs aside, we did everything together. We worked on each other’s cars (his Oldsmobile Cutlass, and my Country Squire), dreamed big about becoming pro wrestlers (our tag team name was S&M, for Smith and Mays), or starting a sludge metal band (Owen on guitar, me on bass, drummer… doesn’t really matter).

What really mattered was that we spent most of our time constantly trying to crack each other up. We would escalate jokes, stories, scenarios, and situations far beyond the point of reason. During dark times, we would take gallows humor to new lows, trying to laugh away the pain.

The funeral suit, by the way, is an inside joke of ours. We probably have hundreds of inside jokes. One of which was one we came up with back in high school. We had somehow “calculated” that at any given time, only 2% of the world’s population was cool enough to hang out with us. If one of us had met someone new, someone funny, a good sport, someone as off the wall as us, we would tell the other “He’s cool; he’s in the 2%”.

The night after Owen died, I wasn’t going to sleep, so I stayed up all night and I re-read every text and every Facebook message that we had. And when I ran out of ours, I started reading all of yours, and others from around the country, and around the world. The outpouring of people who had known Owen for 10 years, 5 years, 3 years, or met Owen at a show in Belgium once, never to see him again. Everyone had connected with him in the same way.
Whether it was for 20 years like me, or for only 20 minutes, you knew the one true Owen Mays. I don’t think he could have been any other way, even if he tried.

And that’s why I take extra pride in being a part of that 2% today. Knowing that no matter where he went or who he met, he was always the same man. He loved to laugh, he was gracious and kind, charming, yet humble. Ever the student, he loved talking with people who knew more than him. He was a bright, honest, a genuine constant in a world of ever changing faces. A world that feels emptier without him, but one that has been brought a little closer together because of him. - Michael Smith