Owen Robert Mays, Cambria, died in the early morning hours of July 22, 2015.
He was born on All Saints’ Day, Nov. 1, 1982, to Robert and Virginia (Cuff) Mays. Owen was a member of the Cambria-Friesland High School Class of 2001. He played football for five years, earning all-conference honors his senior year, and played basketball for one year. He played the trumpet in the elementary band and sang in the high school choir. Owen was also on the football homecoming court his senior year.
When Owen was 18, he went to Chicago to have his picture taken with Ozzy Osborne. Owen loved old country music and shared his talents with many. In June he traveled to Europe to participate in the Muddy Roots Music Festival Europe and had an awesome time. While in Norway Owen mentored an 11-year-old boy on playing the guitar.
Owen knew the words to hundreds of songs and had facts on all of the old country music stars. He embarrassed his traveling companion when they were touring a museum by knowing more facts than the tour guide. Owen was currently doing shows with Amanda & Eric Bestul, as Owen Mays and the Last Calls. Many wonderful people loved Owen, and he loved them; they even enjoyed his pranks.
He is survived by his mom, Ginny Mays; his brother, Matt (Robyn) Johnson; niece, Hailey Johnson; nephew, Logan Johnson; uncles and aunts, Gert Ellen Molitor, Linda Mays, Willard and Darlene Mays, Judy Cuff, Marvin and Sally Cuff; and many cousins.
He was preceded in death by his dad, Bob Mays; and uncles, Red Molitor, Dick Mays, and Phil Cuff.
A memorial service will be held Saturday, Aug. 1, at 12:30 p.m. at Smith Funeral Home & Cremation Service in Rio. 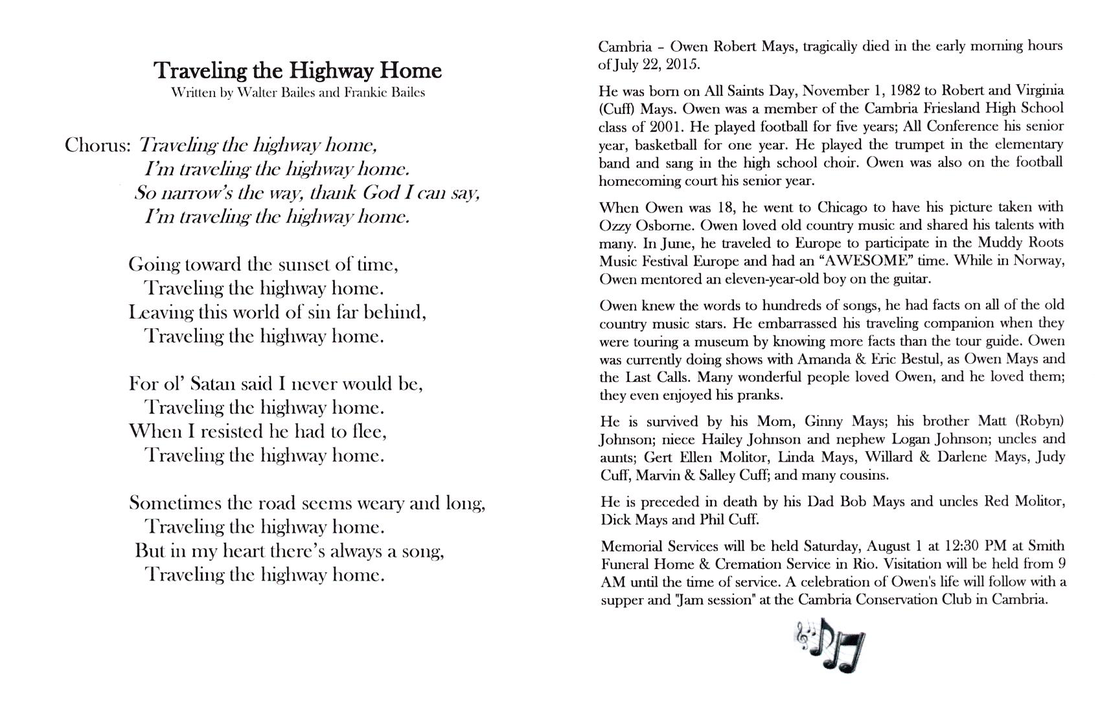